Discover Fitness Foundation » Who We Are » Spokespersons

Svetlana Boguinskaia was a Soviet/Unified Team/Belarusian gymnast. Especially renowned for the drama and artistry she displayed on floor exercise, she was called the “Belarusian Swan” and the “Goddess of Gymnastics” because of her height, balletic grace, and long lines. Boguinskaia is a three-time Olympic Champion, winning an individual gold medal in Vault at the 1988, and team golds in 1988 and 1992.

Today Boguinskaia lives in Houston, Texas with her husband and two children. She runs two businesses, an online gymnastics apparel retailer and a summer camp for gymnastics students, but she also considers herself a stay-at-home mother. 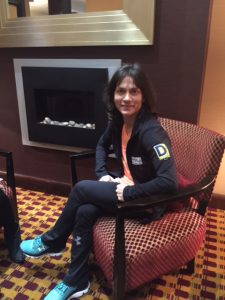 Oksana Chusovitina is a world and Olympic champion gymnast who competed for the Soviet Union, Uzbekistan, and Germany. Chusovitina is one of a few women, along with Cuban Leyanet Gonzalez, Soviet Larisa Latynina, and Dutch Suzanne Harmes, to return to international competition after becoming a mother. She is an eight time Olympian, making her the only woman to ever have competed in eight Olympic Games and earning an entry in the Guinness Book of World Records.